ZCE white sugar futures trade on the Zhengzhou Commodity Exchange (ZCE). They were launched on January 6, 2006[1].

In the first half of 2009, ZCE white sugar futures traded 116,695,160 contracts (down 17.6 percent from the same period last year), particularly due to the subdued activity in the months of May and June, during which, on average, 392,939 and 433,419 contracts traded per day, respectively, down sharply from an average 1,194,971 and 947,955 contracts in May and June 2008. As a result, ZCE White Sugar futures accounted for only 14 percent of the nationwide volume for the six months ending June 30, down from 24 percent in 2008, and instead DCE Soy Meal futures became the most actively traded futures contact in China.

Each ZCE white sugar futures contract represents 10 tons of deliverable 1st grade white sugar, which is defined in accordance with Exchange standard Q/ZSJ002-2005, while substitutions at differentials that meet ZCE delivery rules are also good for delivery, and its delivery date is set as the twelfth trading day of the contract month[2].

In 2008, ZCE white sugar futures contract was the most actively traded (in terms of volume) and largest (in terms of turnover) futures contract on the ZCE as well as in the overall Chinese futures market, with 330,929,492 contracts traded (+263.91 percent YOY) and turnover amounting to 11,869.7 billion yuan (+236.82 percent YOY), making it the most actively traded agricultural contract in the world, according to the FIA.

One of the reasons for high activity is the relatively small size of both producers and commercials in China's sugar industry. In China, white sugar is made from sugar cane, which is grown in Guangxi, Yunnan, Guangdong, and Hainan, or sugar beets in Xinjiang, Heilongjiang, and Inner Mongolia[3]. 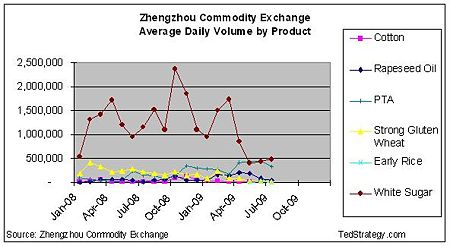