Allendale's 13 U.S. branches - most in the rural mid-west - operate brokerage, hedging, research and advisory services on agricultural commodities. The firm also produces well-known daily and monthly charts and reports that are used by governmental agencies and other institutions to project agricultural market conditions.

Allendale, Inc. was formed in 1984 in a country grain elevator in the Illinois town of Crystal Lake, a far-western suburb of Chicago, by two former employees of Heinold Commodities.[1] The company has since expanded to operate 13 branch offices in eight states, including three in Illinois and two each in Indiana, Nebraska and Iowa and is seeking further outposts.[2] 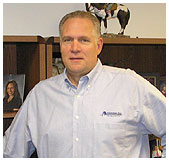 President, CEO and co-founder Paul J. Georgy (left) grew up on a farm and began his agricultural career in 1973 as the general manager of an Illinois beef cattle farm before shifting to commodities brokerage in 1981. In 1984 he co-founded Allendale, Inc. with current senior vice-president Bill Biedermann and now manages all its brokerage and research. Georgy began serving on the board of the National Introducing Brokers Association (NIBA) in 1992, including stints as NIBA vice-president, president, treasurer and secretary. He is also on the board of the National Futures Association.[5] He is a graduate of Southern Illinois University, Carbondale.

Biedermann, like Georgy, also grew up on a farm and managed another agricultural operation before co-founding Allendale in 1984 after joining Heinold Commodities in Harvard, Illinois, where he helped to establish a Middle East trading desk. He specializes in developing hedging and risk-management strategies for U.S. food companies. He is a graduate of Illinois State University.