The Amsterdam Stock Exchange opened in 1611 and is regarded as the world’s first organized stock market. The market formalized what had previously been a relatively informal trade in shares in the Dutch East India Company, which was seeking funds to continue its exploration and exploitation in the Far East.[1] 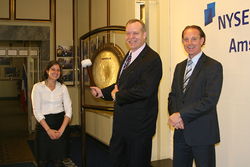