Chicago Board of Trade Building

The Chicago Board of Trade Building, located at 141 West Jackson Blvd., was completed in 1930 and was Chicago's tallest building from 1930 to 1965. (It was surpassed that year by the Daley Center.) In 2012, the CME Group sold the building to GlenStar Properties and USAA Real Estate Company.

The architects of the current building were Holabird & Root.[2] 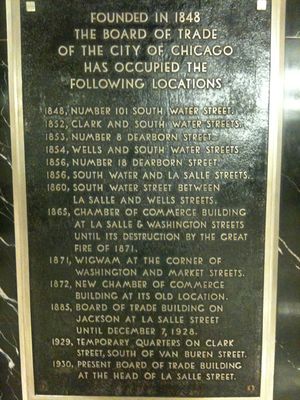 The building is known for its art deco architecture, sculptures, and stone carving. It is crowned by a 31-foot tall aluminum statue of Ceres, the Roman goddess of grain. She holds a sheaf of wheat in one hand and a bag of corn in the other. Because the building was the city's tallest at the time, and Ceres was so high up, the sculptor, John H. Storrs did not think anyone would ever be close enough to see the statue's face, so he did not give her one. Ceres is made of solid aluminum and weighs 6500 pounds.[3]

On the front of the building, which faces LaSalle Street, is an enormous clock, on either side of which are hooded figures, an Egyptian holding grain and a Native American holding corn. Two granite statues (from the old CBoT building, demolished in 1929) representing Industry and Agriculture stand in the building’s plaza, and representations of bulls protrude from the building’s north side, a reference to a “bull market.”

Its architecture has made it a popular attraction for both tourists and filmmakers. Its trading floors were used in the film Ferris Bueller’s Day Off, and it served as the headquarters of Wayne Enterprises in Batman Begins.

The building underwent a $22.6 million renovation in 2006, aided by a Class L Cook County tax credit worth about $9.8 million over 12 years.

In June of 2011, CME Group said it would market the historic Chicago Board of Trade Building in a deal that would involve the north and south buildings being offered as a partial sale-leaseback. The company said it had hired Jones Lang LaSalle and Holly Duran Real Estate Partners LLC to market the building. CME also said it would enter into a long-term lease of the agricultural commodities trading floor, located in the north building, and office space in the south building. It would retain ownership of the east building, which houses CME's financial trading floor.[4] 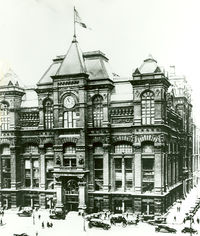 CME Group Inc. had threatened to move at least some of the exchange's jobs out of state after Illinois temporarily raised its corporate income tax in January.[5]

In 2016 the building added a service called the “Press Box,” which features laundry and shoe shine services and a mobile device tech repair facility.[6] 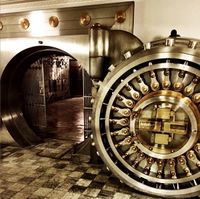 The door to the vault in the basement of the 1929 CBOT Building weighs roughly 22 tons, is made of drill resistant steel, and has four watch movements for the time lock. The vault inside holds 2,000 individual lock boxes of various sizes and shapes. At one time this safe held everything from gold, silver, and money to stock certificates.[7]

In 1930, President Herbert Hoover pressed a symbolic button in Washington, D.C., to start trading on the CBOT trading floors on June 9, 1930. 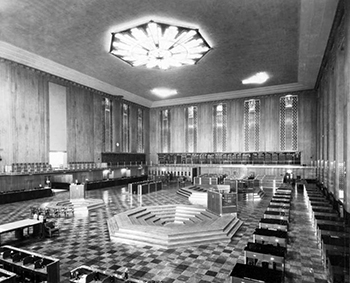