LSE Group's involvement in the index business dates back to 1984, when the exchange began calculating the FTSE 100 Index for the Financial Times' former parent company Pearson. The index team was spun off into a joint venture in 1995.[2] In December 2011, LSE Group agreed to a £450 ($705 million) acquisition of Pearson's 50 percent ownership to become the sole owner of the index group.[3]

In June 2014 the LSE agreed to buy The Frank Russell Company for £1.59 billion ($2.7 billion). The purchase was the largest one in the LSE's history and and gave it the opportunity to attract trading in securities and derivatives that track the Russell indices.[4] It also brought together about $9 trillion of assets benchmarked globally and made LSE the No. 2 player in U.S.-listed exchange traded funds.[5] The deal closed at the end of 2014.[6]

In February 2015, LSE Group entered into a licensing agreement with CBOE to develop and list options based on existing FTSE and Russell Indices. Cash-settled options on the flagship Russell 2000 began trading on CBOE as of April 1, 2015, and in October 2015, the options exchange began offering options on other Russell index products including the Russell 1000 Index (RUI), the Russell 1000 Value Index (RLV) and the Russell 1000 Growth Index (RLG)[7]

When the exchange group acquired Frank Russell Co., it also inherited Russell Investments, the firm's asset management division which held, at the time of acquisition, about $262 billion under management. Soon after the acquisition was completed, LSE Group put the asset management division up for sale. In October 2015, LSE agreed to sell Russell Investments for $1.15 billion cash to an investment group led by the U.S. private equity group TA Associates.[9]

Russell's US indexes represent nine of the top 10 benchmarks in terms of the number of products as well as the amount of assets, surpassed only by the S&P 500 index.[10]

The U.S. family is based on the Russell 3000E. The large-cap Russell 1000 Index incorporates the largest 1,000 companies in the Russell 3000, with the balance used to form the Russell 2000. The Russell Microcap Index captures 1000 additional stocks, extending total coverage to 4000 in Russell's U.S. index universe. The indexes are reconstituted annually in June, with IPOs added on a quarterly basis.

The indexes have been used to create a range of products - including index futures and options and ETF futures and options - traded on exchanges including: the American Stock Exchange; NASDAQ; Chicago Board Options Exchange, the Intercontinental Exchange (ICE), the New York Board of Trade, the International Securities Exchange, NYSE Arca, the Philadelphia Stock Exchange and the Chicago Mercantile Exchange.

The Russell Global Index was launched in January 2007, using the Russell 3000 Index as its U.S. component, and divided into 300 core indexes covering 22 regions and 63 countries.[11]

FTSE Russell index products can be divided into the following categories:

A full list of FTSE Russell index products can be found HERE. 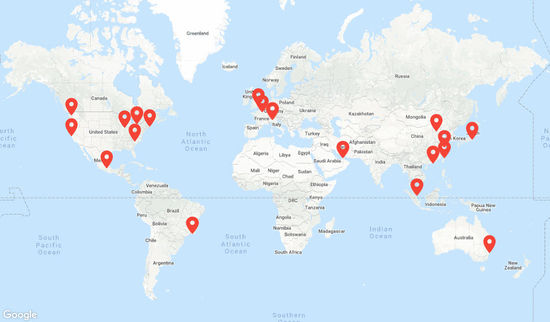