The Market Information Data Analytics System (MIDAS) is the U.S. Securities and Exchange Commission's market surveillance and trade monitoring system, launched in January 2013 to track high-speed algorithmic activity.[1] According to the SEC, MIDAS collects about 1 billion records from the proprietary feeds of each of the 13 national equity exchanges time-stamped to the microsecond, and allows the commission to analyze of thousands of stocks and over periods of six months or even a year, involving 100 billion records at a time.[2] Among the data MIDAS collects:

After the May 6, 2010 "flash crash," when the Dow Jones Industrial Average plunged nearly 1000 points in a matter of minutes, only to quickly rebound, regulators met to discuss market structure and regulatory issues that may contribute to volatility. It was clear, though, that the regulators had fallen behind in their ability to keep up with the new breed of high-speed trading activity. Among the recommendations of the Joint CFTC-SEC Advisory Committee on Emerging Regulatory Issues was the development of a state-of-the-art consolidated audit trail for the US equity markets and to augment existing data collection regarding orders and executions.[3]

The SEC sent out a proposal to vendors in November 2011 and, in June 2012, the commission chose New Jersey-based data analytics firm Tradeworx to develop the system that was to become MIDAS.

The system was introduced to SEC staff in January 2013. In October 2013, the SEC rolled out a new website that will allow the public and market participants access to MIDAS information, and will act as a portal for the dissemination of market structure data, analysis and research.[4] 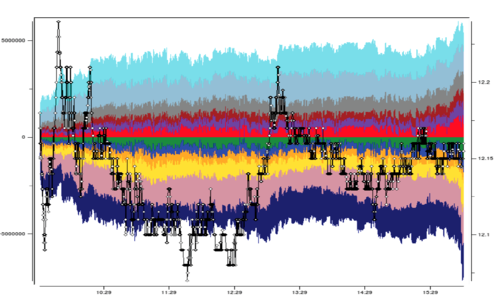