The instruments were first introduced to the exchange community in April 1973, when Chicago Board Options Exchange began offering options on just a handful of companies (only calls and no puts until four years later in 1977). Today options on more than 50 exchanges worldwide cover stocks, stock indexes, currencies, interest rates, commodities, metals, energy products and other categories.

An option provides an explicit structure for the potential transaction, detailing the exact type and quantity of financial instrument to be bought or sold, the price for the transaction, and the length of time that the transaction right will be granted.

Options are almost always sold in contracts that cover 100 shares of the underlying instrument. There have been attempts to alter that, namely the 10-share "mini" options tried by Cboe and BOX's 1000-share "jumbo" option on the the SPDR S&P 500 ETF (SPY).

As a hypothetical example, a stock option could be an option to purchase (a "call" option) or sell (a "put" option) 100 shares of XYZ Corporation at $50 per share, with an expiration date of June 30, 2007.

An option has its own value that is determined by a number of factors, including the amount of time left to expiration, the current value of the security it represents, and the amount of volatility in the security's market. The option buyer pays the cost of the option (the "premium"), which is transferred to the seller minus the seller's transaction costs.

Until the end of the expiration day, the buyer of this option would have the right to exercise his option and either buy or sell the stock (depending on whether he bought a put or call option). In the above example, no matter at what price XYZ stock is trading, exercising a call option (an option to purchase) will result in the option owner buying 100 shares of XYZ at $50 per share. Once exercised, the option is removed from the owner's portfolio.

If the owner of the option does not exercise it, then at the end of the expiration day, the option is removed from the owner's portfolio and no action is taken. The seller of that option will no longer have the risk of being assigned the opposite side of that option's transaction.

Options may be bought and sold purely for the profit and loss of those transactions, where the buyers and sellers have no intention of exercising the options and entering into transactions in the underlying instrument. Options may also be bought and sold in specific combinations, either with each other or with the underlying security, to create different risk/reward profiles.

It is not known when when the first option contract traded; however, similar contracts can be traced back as far as the Romans and the Phoenicians, who used them in shipping, and ancient Greece, where a mathematician and philosopher named Thales used them to secure a low price for olive presses in advance of the harvest. They were also used in the tulip trading craze in Holland in the 1600s.

Options appeared in America roughly the same time as stocks. At first they were not traded on an exchange; trades were done privately between buyers and sellers. Growth in options trading remained slow for the next few decades, mostly because trading by phone without being able to determine the real market for a contract made them illiquid and cumbersome to trade.

In the late 1960s, with commodities volumes low, the Chicago Board of Trade was examining other market opportunities and decided to go into options trading. Joseph W. Sullivan, who was then vice president of planning for the CBOT, proposed standardizing the contract terms. He also recommended the creation of an intermediary to issue contracts and guarantee settlement and performance. This intermediary eventually became the Options Clearing Corporation, established in 1975.

In 1973, the first U.S. options exchange, the Chicago Board Options Exchange (CBOE) was founded and call options on 16 securities started trading on April 26. A few years later, put options began trading. A decade later, index options appeared on the scene.

With the advent of CBOE, traders had access to published quoted options prices for the first time, and a market maker system to make sure that there was a secondary or resell market for options.[1]

Other exchanges began trading listed options, beginning in 1974, including the American Stock Exchange (AMEX), the Pacific Stock Exchange (PSE), and what is now known as the Philadelphia Stock Exchange (PHE). The most recent entrants to the game are the International Securities Exchange (ISE), Boston Options Exchange (BOX), NYSE Arca, and NASDAQ OMX'S NASDAQ Options Market.[2]

In 1975, the Securities and Exchange Commission approved the Options Clearing Corporation (OCC), which is still the clearing agent for all US-based options exchanges.[3]

The launch of the International Securities Exchange (ISE) on Dec. 31, 1999, ushered in a new electronic era in the options world. Up until that year, the open-outcry options exchanges had unofficially, by a "gentleman's agreement," made it a practice not to trade one another's products. The SEC ended this practice in 1999, and the exchanges were free to compete against each other. The (ISE) came online on May 26, 2000. Its growing success spurred the other exchanges to move forward into the electronic age.[4]

The increased competition among options exchanges and the advent of electronic trading platforms have led to huge growth in options volume. It has also led to narrower spreads, lower fees, and an influx of institutional participation. 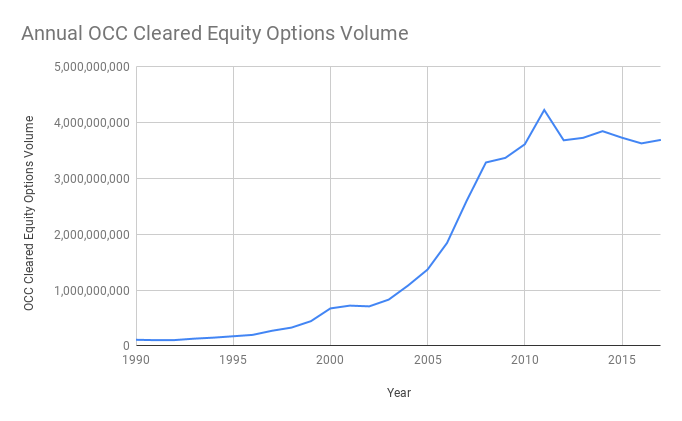 The U.S. options markets are the most competitive financial markets in the world. Unlike the stock and futures markets where a particular product may trade on only one exchange, the competition between options exchanges is fierce because identical options contracts may trade on multiple exchanges. This multiple listing of products gives investors the ability to freely choose among exchanges to execute their orders. For each exchange, speed becomes a critical factor in determining who “wins” an order.

MarketsWiki Page of the Day