SHFE gold futures trade on the Shanghai Futures Exchange (SHFE). They were approved by the China Securities Regulatory Commission on Sept. 11, 2007 and launched on Jan. 9, 2008[1].

Each SHFE gold futures contract represents 1 kilogram of deliverable grade gold, which is defined as domestic gold with fineness not less than 99.95 percent or overseas gold that is regarded by LBMA as good delivery, and its delivery date is set as the 16th to 20th day of the spot month[2]. SHFE gold futures contract also has a delivery restriction that makes individuals ineligible to make or take delivery.

Each SHFE gold futures contract is subject to a margin rate equivalent to 7 percent of contract value (e.g., 14329 yuan = 204.70 yuan [AU0812 last price on May 23, 2008] x 1000 [grams/contract] x 7 percent) as well as a trading fee equal or below 0.02 percent of transaction value / contract. At the current exchange rate of around 7 yuan / dollar, the margin requirement for one SHFE gold futures contract is around $2,000, almost twice as expensive as the maintenance margin requirement for CME/CBOT Mini-Gold futures[3].

On the first day of trading, Jan. 9, 2008, SHFE gold futures traded 121,468 contracts, but about two months later, volume has declined to 16,056 contracts on March 7. Thereafter, SHFE gold futures continued to stagnate, in terms of volume, although there was a brief spike in October, and 2008 total volume came to a mere 7,780,934, making it the least active futures contract in China's futures market, except for virtually non-existent DCE No.2 Soybeans futures and ZCE hard white winter wheat futures.

China's commercial banks have long been banned from trading futures, but they have been particularly interested in trading SHFE gold futures and seeking approval from the China Banking Regulatory Commission (CBRC)[4]. On April 2, 2009, the Shanghai Futures Exchange admitted four commercial banks - Industrial and Commercial Bank of China, Bank of Communications, China Minsheng Bank, and Industrial Bank - as members[5]. 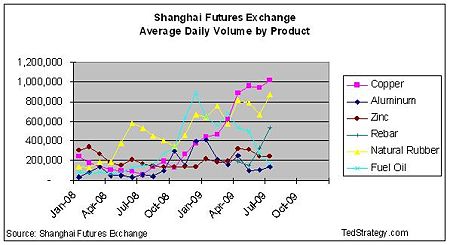