We visit more than 100 websites daily for financial news (Would YOU do that?). Read the John Lothian Newsletter.
FREE 90 day trial

Based in Chicago, the company was formed by the $11.6 billion merger in July 2007 of the 109-year-old Chicago Mercantile Exchange (CME) and the 159-year-old Chicago Board of Trade (CBOT), its former rival. Through a series of subsequent acquisitions of exchanges, technology providers and OTC markets, the combined CME Group has grown into the largest exchange in the world as measured by derivatives volumes and market cap. It was further expanded with the November 2018 acquisition of NEX Group, combining CME's futures and clearing operations with NEX's FX and fixed income cash trading platforms. It also added NEX's OTC post-trade products and data offerings.[1][2]

Trading on the exchange is largely done on its electronic trading platform called CME Globex, a global matching platform for all of its products. A small percentage of trading is still done on the trading floor in Chicago, although most of its trading pits were closed in July 2015. The company also offers CME Direct, for arranging, executing and recording OTC and listed trades. Customers can use mobile access and CME Messenger for instant-messaging, as well as CME Straight Through Processing, for direct connectivity on trade information, customer orders and risk management.

Clearing of trades for exchange-traded derivatives and OTC products is handled by CME Clearing.

CME Group's history (through individual and intertwining paths of CME and CBOT) is rooted in early Chicago from grain trading in the late 1840s to the introduction of financial futures in the 1970s, to electronic trading in the early 1990s, and demutualization in the early 2000s. At the time of the merger in July 2007, the CBOT and CME were 159 and 109 years old, respectively. 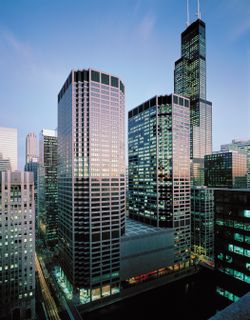 On July 9, 2007, the Chicago Mercantile Exchange officially became the winner in the bidding war for the CBOT, as its members approved CME's offer, thus ending decades of competition and rivalry between the two exchanges. According to then-CBOT chairman Charlie Carey, it was "a great day for the city of Chicago."[7] The final deal, valued at $11.9 billion, was 25 percent higher than CME's first offer nine months earlier, as a rival bid by Atlanta-based Intercontinental Exchange led to a bidding war.

The formation of CME Group did not result in any change to trading privileges for CME and CBOT members.[9] CME members can trade legacy CME products at member rates directly from the trading floor; CBOT members enjoy the same benefits on CBOT products only.

In addition, in January 2008 all legacy CBOT products migrated successfully to the CME Globex platform from e-cbot.[10]. CBOT had already moved clearing of all trades to CME Clearing from its legacy clearing provider, the Board of Trade Clearing Corp., in 2003; thus, this was one huge operational hurdle that did not require consideration during the migration. Phased integration of the trading floors took place between March and July of 2008, into the trading facility at 141 W. Jackson, the CBOT Building.

On March 17, 2008, CME Group announced its plan to acquire NYMEX. The terms called for NYMEX shareholders to receive $36 and 0.1323 shares of CME Group for each NYMEX share. It also included a bid to buy the 816 NYMEX memberships for $612,000 each.[11] On July 18, CME increased the offer for NYMEX memberships to $750,000, from $612,000. Under the terms, members are allowed to keep their rights to lease seats on the floor trading and maintain the floor trading seat market. CME agreed to keep the trading floor in New York as long as it was profitable and met certain trading thresholds.

On June 24, 2008, CME Group received an unconditional approval from the U.S. Department of Justice to acquire NYMEX.[12]

On August 18, 2008, Nymex Holdings shareholders voted to approve the deal. As of the approval date, the value of the acquisition was $8.3 billion.[13]

On Oct. 17, 2012, CME Group announced that it would acquire the Kansas City Board of Trade for $126 million in cash.[14] The board of directors of KCBT unanimously approved the transaction.[15]

Under the original terms of the deal, CME Group sold its stake in Credit Market Analysis (CMA) to McGraw-Hill, which then folded it into its S&P Capital IQ unit. Credit Market Analysis, Ltd. (CMA) is a data and information company specializing in OTC derivatives markets, founded in 2001 by a group of credit derivative specialists. CME Group acquired CMA in March 2008 as the exchange sought to expand into credit derivatives execution and clearing. [20][21][22]

FXMarketSpace was an over-the-counter (OTC) foreign exchange (FX) platform which was introduced in 2006 as a 50/50 joint venture between CME Group and Thomson Reuters. The idea was to introduce the central counterparty clearing and straight-through processing model to the OTC forex market. Trading on FXMarketspace began in May of 2006 in seven currency pairs, including the U.S. dollar versus the yen, euro, pound, Swiss franc and Canadian dollar, as well as four currency cross-pairs. Processing functions were provided through a deal with FX post-trade service firm Traiana. While FXMarketspace opened to much fanfare and was initially supported by the banking community, interest in the platform waned, and the platform was shuttered on Oct. 17, 2008.[23]

CME was one of the investors in OneChicago, a fully electronic exchange owned jointly by Interactive Brokers, CBOE, and CME Group created in May 2001. It listed futures on single stocks, narrow-based equity indexes and exchange traded funds. It was a privately held company and regulated jointly by the Securities and Exchange Commission and the Commodity Futures Trading Commission.[24]

The exchange began as a joint venture between the CME, Chicago Board Options Exchange, and the CBOT. In March 2006, electronic broker-dealer Interactive Brokers Group LLC took a 40 percent stake in the venture. Directly after the CME and CBOT merger in 2007, the ownership structure was as follows: 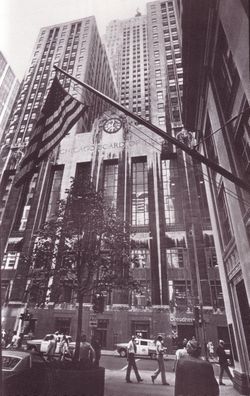 The Chicago Board of Trade (CBOT)

CME offered $10 million in 2018 to buy out the B shareholders' board election rights, but the proposal was voted down. CME had debated the issue with B shareholders as it tried to reduce the size of its board and streamline governance. Currently, six of the 20 CME board directors are elected by Class B shares issued to owners of Chicago Mercantile Exchange seats when the exchange converted to a corporation from a member-owned exchange. In February 2020, CME disclosed in an SEC filing that its board had voted to amend its bylaws to eliminate B shareholder nominating committees. The change meant that the board itself, through its four-member nominating and governance committee, would be able to nominate up to 12 B shareholders for election. It would not eliminate the B shareholder directors' seats.[27] The change is scheduled to go into effect in 2021.

On November 2, 2018, CME Group announced it had completed the acquisition of NEX Group for $5.4 billion. The deal, first agreed to on March 29, 2018, combined CME's futures and clearing operations with NEX's FX and fixed income cash trading platforms. It also added NEX's OTC post-trade products, data offerings and financial technology firms. CME Group retired the NEX name and brand but continues to operate its individual markets and optimization businesses as sub-brands, including BrokerTec, a top cash trading platform for FX and fixed income, EBS, an FX trading platform, Traiana, a FX messaging and trade processing network and TriOptima, a compression and portfolio reconcilliation service. [28][29][30]

CME Group has pursued partnerships, memorandums of understanding (MOU) and other deals with exchanges, index providers and others in an effort to secure a global presence.

CME Group sold its stake in BM&FBOVESPA, (now known as B3) in 2017 for a net profit of $86.5 million, according to its Form 10-K in its 2018 annual report. It holds a 25 percent stake in Bursa Malaysia Berhad valued at $27.1 million and has several agreements for licensing, order routing and trading matching services. CME holds a 50 percent stake in Dubai Mercantile Exchange's parrent [[Dubai Holdings Ltd., an estimated $16.9 million investment. [32], Osaka Securities Exchange, Russian Trading System Stock Exchange and Singapore Exchange Limited.

CME Group launched futures on the Secured Overnight Financing Rate (SOFR) in 2018. They were followed by the launch of options on SOFR futures in January 2020.[34]

CME Group launched a Bitcoin futures contract on December 18, 2017, trading on the Globex platform and cleared via ClearPort. The futures are cash-settled and based on the CME CF Bitcoin Reference Rate, a once-a-day reference rate of the U.S. dollar price of bitcoin. CME and Crypto Facilities have calculated and published the BRR since November 2016.[42]

Both reference rates will be calculated by Crypto Facilities based on transactions and order book activity from Kraken and Bitstamp. Gemini's prices will be included on CME's crypto pricing indices, starting August 30, 2019.[43][44]

The exchange is supported by CME Clearing, the exchange's central futures clearing mechanism, which settles all trades and acts as the counterparty between buyers and sellers, thus virtually guaranteeing the creditworthiness of every transaction The division clears not only its traditional futures contracts but also OTC contracts in interest rates, FX and commodities. CME Group exited the credit default swaps business in mid-2018. In its history, CME Clearing has never experienced a default and was designated as a systemically important financial market utility by the Financial Stability Oversight Council.

CME offers data services in a number of ways, including real-time disseminated data through its Market Data Platform or through licensed distributors. The exchange also offers historical data through CME DataMine, and through reports accessed via its web site. For more information, click HERE.

CME Group wants to increase what the existing futures user base can trade while also addressing those 13 million other active retailers. The proposed solution? The launch of Micro E-Mini Equity Index Futures – contracts linked to the S&P 500, Nasdaq 100, Russell 2000 and Dow Jones Industrial Average that are 1/10 the size of the exchange’s flagship E-Mini products.


Terry Duffy discusses what 2019 holds for the world’s largest derivatives exchange, covering such topics as political uncertainty, the NEX integration, and following up on a record 2018. 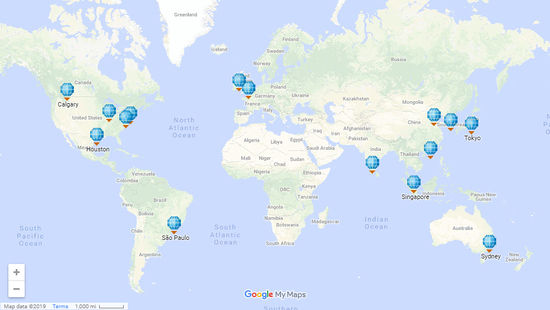