Miami International Securities Exchange, LLC (MIAX) is a U.S. equity derivatives market. It received regulatory approval on Dec. 3, 2012 and began operations on Dec. 7, 2012.[1] MIAX is owned by Miami International Holdings, Inc., based in Princeton, New Jersey[2] and acts as its own self-regulatory organization. 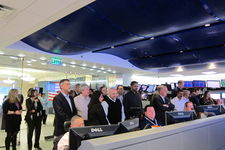