The Zhengzhou Commodity Exchange obtained CSRC approval for rice futures in March 2009[1], and while it was expected to launch that contract as early as before the end of March[2], ZCE early rice futures actually started trading on April 20[3].

Each ZCE early rice futures contract represents 20 tons of deliverable grade early long-grain nonglutinous rice, which is defined as National standard Rice, GB1350-1999, 3rd grade (including) and above or substitutions at differentials specified by Delivery Rules of ZCE as good delivery, and its delivery date is set as the seventh business day prior to the last trading day in the contract month[4]. 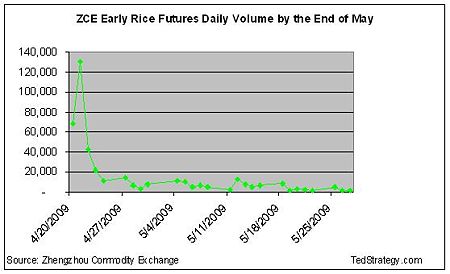